I've been looking for a way to record sounds (namely music) off websites like MySpace and Neocha, because the music that we play on our show has to be 1- indie, and 2- Chinese.

Needless to say that I couldn't play music from many of the bands that I hear on Neocha's NEXT music player, just because they happen to be obscure Chinese bands that may not have considered an international audience (some, however, have been touring the world). In fact, as far as I know, you can't download the songs even if you wanted to pay for it (don't even think about finding some of those bands on P2P networks).

I finally got to try out a solution that my friend Rob suggested. And that's the Audacity, a free open-source software for mixing and recording sounds/music. There's nothing so special about Audacity (except that it's free), but it's when you use Audacity with a sound source that's your computer's stereo mixer that it becomes interesting (see instructions).

I found out that my own computer, a Dell XPS m1210, has a sound card (a STAC92xx by Sigmatel) integrated to the motherboard (Intel). On Windows, the driver provided by Dell "C-Major Audio Driver" does _not_ let you mix stuff, and does not give you access to the output of your stereo system. I read somewhere that you could somehow replace this driver (its XP version only) by the same driver provided through LG.

Since my Windows is Vista, I rebooted into my Ubuntu (now 8.10 Intrepid Ibex) instead and looked at my options from there. Audio has always been a part of the Linux world that I neglected. I used mplayer before to save streamable videos (it's even more simple as in my entry, because you just use the "-dumpvideo" option). How about audio then?

I understand that ALSA is the mixer - your applications speak to ALSA and pass it to PulseAudio, which is the layer that redirects everything back to your sound card, aka The Hardware. Aside from recording, you can also use PulseAudio to make modifications to the output, redirect to different "sinks" (a wireless network-based sound system, anyone?).

There's a nice info page on the Ubuntu wiki. In fact, a section at the bottom ("Recording example...") was what I used to record my music. I also installed the PulseAudio Volume Control (pavucontrol), Volume Meter (pavumeter) and Device Chooser (padevchooser). The latter is a GUI that lets you choose and configure what applications output to PulseAudio and what devices on your computer (front speaker, headphones, or elsewhere?) are used to play sounds.

Following the instructions in the Ubuntu tutorial, I used padsp, a OSS wrapper, which starts an application connect to a PulseAudio server through a OSS audio device ("padsp starts the specified program and redirects its access to OSS compatible audio devices (/dev/dsp and auxiliary devices) to a PulseAudio sound server."). The command is:

(with all the comfort of debug info...)

Then choose the OSS (/dev/dsp) device as you would on Windows with a non-restrictive sound card driver, and start recording using your system's sound output (ALSA something...). Make sure to mute the microphone, also through the PulseAudio device choose!

It's a powerful method, but may be illegal in some countries (not sure which - it's just the Ubuntu tutorial saying). 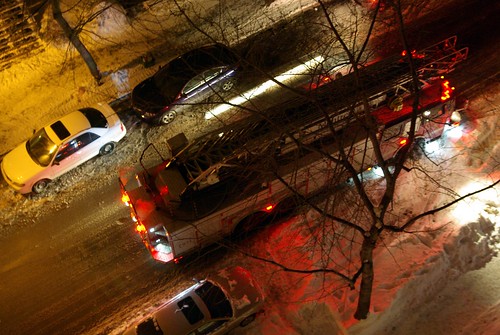 A pipe broke in the apartment two floors next to mine. The one directly below it, and right above mine is flooded, so is my next door neighbour's! I'm lucky: not a single drop of water, but quite a smell of damp plaster / cardboard.

Why didn't I find out earlier? 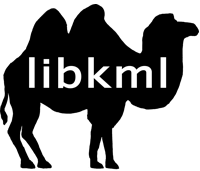 A library to write KML files specifically developed by the folks at Google! Written in C++ but with bindings for Python, Java too (PHP in older versions only).

What a difference five minutes can make 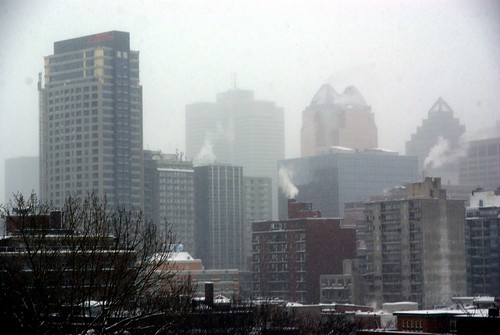 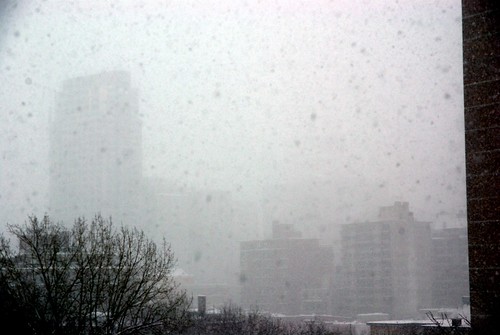 The fluff in moving mages is even more impressive, if you've never lived a real wintertime snowfall. I'm going to head out later just to see how it is *in* the storm. This is perhaps the first big one of the season.

Let the sunshine in 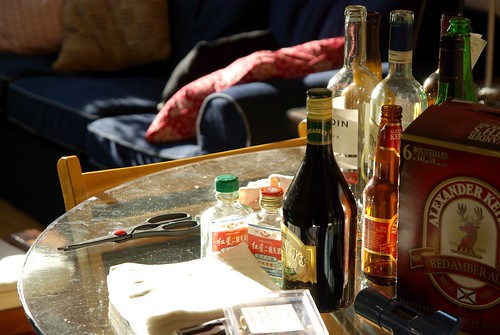 My bedroom at my parents' home faces north. We always lived in the same house, so my mornings had been anything but sunshine, and also quite cold because of lack of isolation / winds blowing on that face of the house.

Now that I live on my own, this apartment and the previous I lived in are characterized with a lot of sunshine shining in in the middle of the day. In the last apartment, I chose my bedroom with my roommates because it was the only one facing south(west). Just sitting on my bed letting myself be baked by the sun is such a great feeling. Especially when it's like -25℃ outside. 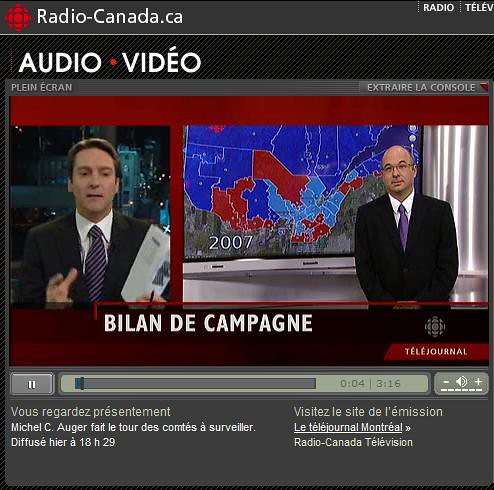 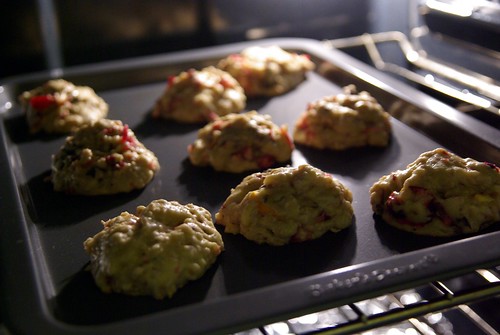 It's the second time I work on election night, and I'm starting cookie-making as a tradition. So not to cause any incident wrt anyone's political affiliation, I decided to make Liberal-NDP coalition cookies, supported by a recipe from Quebec.

I used a full egg instead of whites, some orange juice instead of zest, and vanilla-flavoured sugar instead of vanilla extract. The cranberries were fresh grown in Quebec, sold under the Atoka brand. 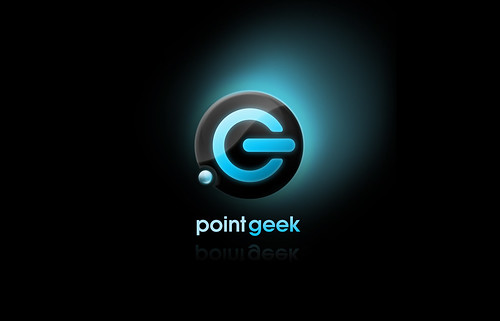 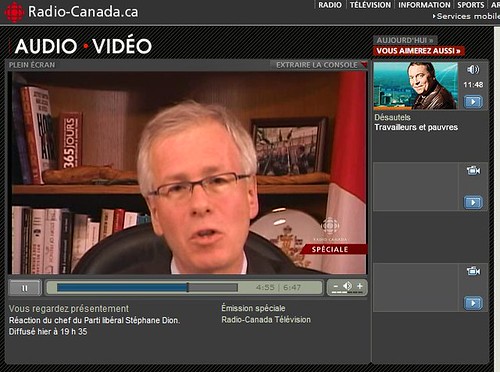 We like Stéphane Dion, but some three minutes into his response to Stephen Harper's address to the nation, the camera awkwardly zooms in into Dion, without maintaining the LPC leader in the middle of the screen. On TV, it was even more noticeable, as he had the RDI ticker right below his throat...

On the other hand, with how closely they shot this, we are able to appreciate the names of some of the books composing Dion's bookshelf. First, he read Hot Air: Meeting Canada's Climate Change Challenge, by Jeffrey Simpson et al. And then, you have 365 Jours pour réfléchir à notre Terre, a photo book by Yann Arthus-Bertrand, famed for his aerial pictures.

The black chair combined with the dark suit made Mr. Dion look like a hunchback...

Maybe they did this quickly to make it a "live" reply to Harper - or maybe the Liberals or the Opposition Leader's office are really out of funds to make a truly compelling video (which also came late to medias and looked a little "warmer" in the colors). 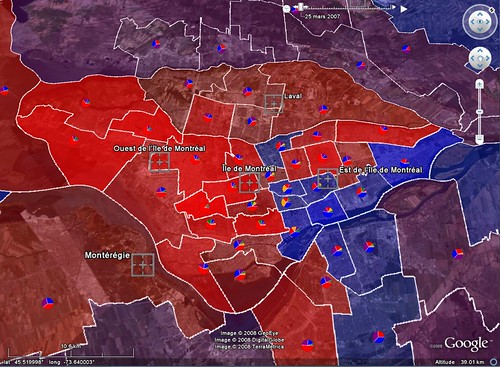 Been getting less than 10 hits per day on earth.smurfmatic.net and about half of them are going to the Canadian election map.

So yes, in fact I did a map of Quebec provincial electoral districts with colors representing results of the past elections. The info balloons give you election results dating back to 2003, which is the first general election since the 2001 redrawing of the electoral map (the one that the Elections Quebec CRO deems obsolete).

Here's the link, and please link it back on your blog or website if you like it:
https://earth.smurfmatic.net/quebec2008/
(Google Earth plugin required only for the web version) 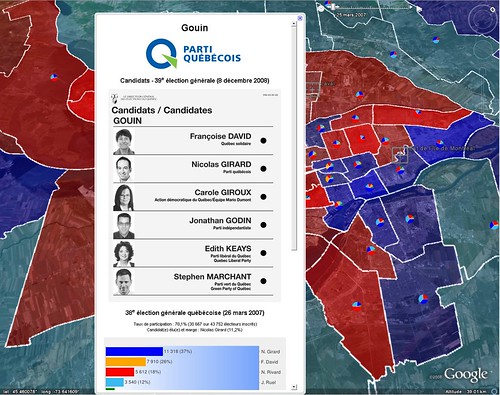 This page is an archive of entries from December 2008 listed from newest to oldest.

November 2008 is the previous archive.

February 2009 is the next archive.