I visited my ancestral village yesterday, from which my grandfather emigrated to Madagascar. Like many members of the peasantry, leaving your hometown must've been teh gamble one was ready to make for their offspring's benefit, pretty much like what many out-of-provincers in Guangdong and other richer coastal provinces are trying to do nowadays. what is it actually, to leave what you are familiar with in order to thrive for a better life? What is it? Must be what our parents, grand-parents, as North-American-born Chinese, have in common.

So, the said ancestral village (on the father side, as "tradition" calls), was always said by my family to be in the outskirts of the city of Shunde (In official pinyin; in Canto, you roughly say "Seun Tak" - written 順德), another big small city of a few million people - an hour or two drive south of the provincial capital of Guangzhou. I don't think we actually drove all the way down to Shunde, as we (my dad's cousin and I) first landed in Nansha (南沙) in the county of Panyu (番禺) in the Pearl River Delta, facing HK on the China side. We visited my uncle's (dad cousin is in fact "uncle" if both their dads are brother - that's how patriarchal China is/was) other factory in Nansha, and had their driver bring us all the way to Foshan (佛山), another small big city of a few million near where my mother's ancestral town is (my other grandfather also left Guangdong province to seek more favourable fortune overseas, in Saigon). We were driven to Foshan via Guangzhou. Geographically, Foshan is between Guangzhou and Nansha/Panyu, but the highway actually crosses the area with only a few exits, so is the layout of expressways (gaosugonglu - 高速公路) in China. (Rough map of the Pearl River Delta)

The region is said to be one of the ten most dynamic economic centres in the World, symbolized by the Guangzhou-Macau-HK triangle. I was expecting more out-of-provincers in the streets, wherever I went, but they were barely noticeable. I suspect that I went by all the places reserved to the wealthier (in their own relative way) like restaurants, shopping malls and transit centres. So where I went, people typically spoke Cantonese, as it is, after all, what was called the Province of Canton, in the colonial times. A bit like a Hong Kong, but somewhat more crude. After visiting China a few times, I can't stress how much more lawful and clean Hong Kong is (in its own relative way). I don't know how new it was, but piracy in HK is not at all rampant, you gotta look a bit before finding your usual pirated software and fashion items. But China? Pfff.

Our ancestral village is called "Cot'gn'on" (which I don't have the official pinyin or Chinese characters, so don't try to pronounce it in English/French, ok?). The nearest urban centre is called "Lecong" (樂從 - simply "Provenance of Happiness"), which is one of those small big burghs... well you get the picture...

Now the pictures (the rest of them are here, along with videos of the house): 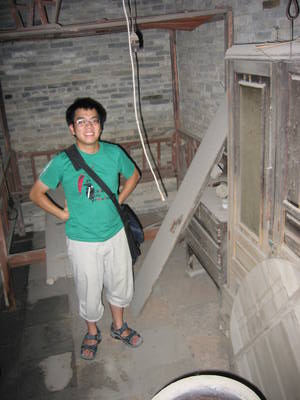 Me smiling inside the house (while its state is no laughing business) in what seems to have been a sleeping room. 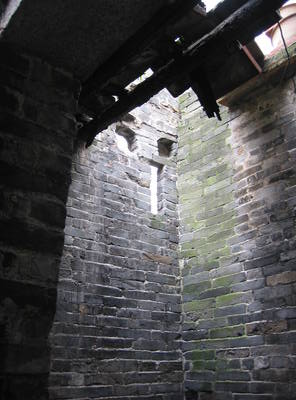 Indeed in a pitiful state: that's the state of the roof above the kitchen room. Not so surprising since no-one lived in it for several decades (I supposed not since the 50s). 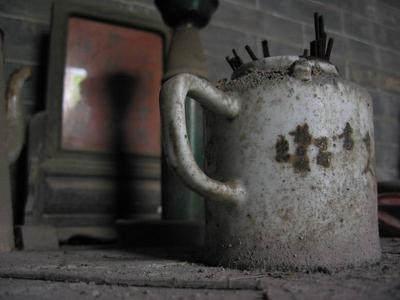 The worship table, left intact for all that time... 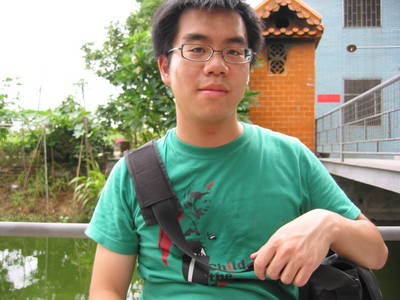 Calm and peace during the hour or so we spent in the village while I ponder about several things worth my time, and pose in a narcissistic frenzy. It's a small village connected to the town of Lecong through a small road into the fields, I'd buy a chalet here if I lived in HK. 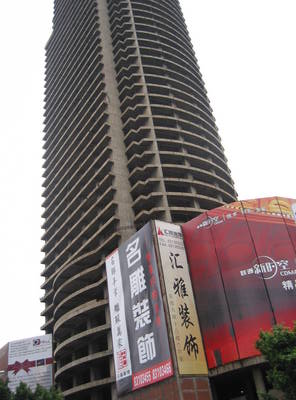 We left the village through Foshan, and revisted that weird skeleton of a skyscraper. It was said that not long after its completion, they found out it was built over a huge hole in the ground. So they emptied it as they could, poured huge amounts of cement into the ground, and left it like that. Dominates the Foshan skyline for some ten years plus now.

[My family name is 岑, which isn't a common surname in Canada/Montreal among Overseas Chinese, but is quite frequent among Chinese who emigrated to Madagascar, and proportionally so in the area where I left. (Incidently, the immigration lady at the HK port from which we departed, also had the same surname) I personally don't know other 岑 (romanized as "Sam" in my case, or "Shum" in my uncle's case) who isn't at least a distant cousin.]

Listed below are links to blogs that reference this entry: Ancestral House.

TrackBack URL for this entry: https://smurfmatic.net/cgi-bin/movabletype/mt-tb.cgi/307

So no one's going to demolish it and build something new now that they've filled up the hole with concrete? Anyway, so how does it feel to be back in your ancestral village? I've got a great-grandfather that apparently left from the province just north of HK.

It feels nothing. Actually, I don't feel anything special since first arriving in HK (it was an emotional moment - three years wanting to be back and finally be).

Indeed the province of Guangzhou supplies with most of the Overseas Chinese, previous to the recent invasion by Mainlanders. Do you know which village he was from?

No idea. But I'll let you know if I ever find out.

Raining was the previous entry in this blog.

A little bit of Hong Kong in my life... is the next entry in this blog.