at17 at the Montreal Club Soda 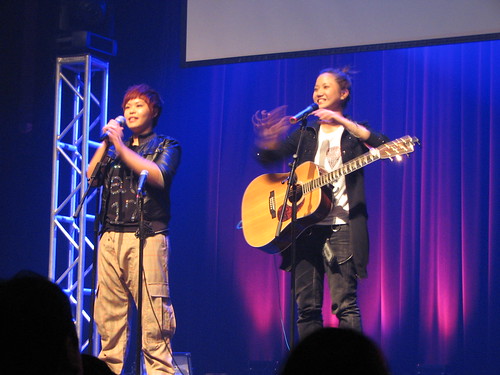 Okay, rendons à César ce qui appartient à César: this was the first time that I attended a singing contest, and it was a very remarkable event. So, yes, a singing contest for Chinese folks in Montreal. It's very interesting that the language of choice is still Cantonese (both hosts spoke Cantonese all the time, except when the contestants were Mandarin-speakers), but that half or more than half of the songs sung were in Mandarin. Shows how meaningful the "old" Cantonese establishment (and how the new force of "pan-China" is changing things). Overall very pleased to having Hong Kong in Montreal.

at17 were very cool on stage. They corrected the crowd on the pace of the clapping for instance, poking fun simultaneously. They started with 始終一天, and there was 三分鐘後, and The Best is Yet to Come, and some song from Sing Sing Sing (我們的序幕), their September 2006 show at the AsiaExpo.

I believe that it is a rare thing to have Hong Kong artists perform in such intimate venues, as the Cantopop stars that we do hear about always do at the HK Auditorium and the like. It is an observation that needs exploring. We know after seeing Beijing Bubbles that a Chinese city could have a music scene. Hong Kong does have one, but if I read about it in a English-language newspaper, is it only geared towards expats, or a "certain slice" of the population? Question en l'air.

Green Life had a kiosk during the singing contest.

After the show, since one of my brother's friends was the brother of one of the organizer, I managed to get my albums signed... Biggest at17 dork of all Eastern Canada, don't you think?

Re: Blog encoding imploded (again) was the previous entry in this blog.

at17 at the Montreal Club Soda - the YouTube video is the next entry in this blog.