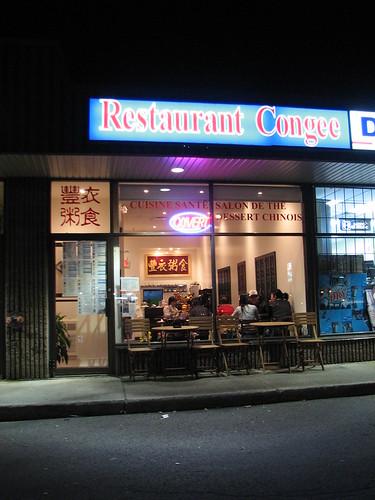 Edit (2008-07-14): Last week, I tried bringing my friends to Restaurant Congee, just to find that it has closed for good, it seems! Just after a few months of existence - quel dommage!

After the singing contest last week, we got a bunch of cards for free dessert at this congee restaurant in Brossard. The name in Chinese is perhaps a little more meaningful, evocative, but I cannot read it. My mother said that she saw ads for this particular restaurant in Toronto - so we might assume that it is part of some pan-Canadian chain.

So, yes, there is a congee place in Montreal, and it is in the suburb of Brossard, where a fairly large Chinese/Asian community lives. The menu indicates countless possibilities of congee combinations, more than I've ever seen in Chinatown for the very least. The said congee restaurant might be in a boring strip mall, but the interior of it is certainly not bad, with its redwood and clean environment (we thought it might've opened recently, as the strip mall sign does not include them yet).

The congee was very good - not too salty, and just the right texture. Of the congees I had in Montreal, this is probably the best presentation, really nothing like in Chinatown restaurants (the tourist trap par excellence in terms of food), with preserved eggs arranged perpendicularly with a jolt of green onions. Even the ho faan (flat rice noodles) was interesting, with a peanut butter and hoisin sauce collecting at the bottom of a folded parchment paper seated in the bowl: 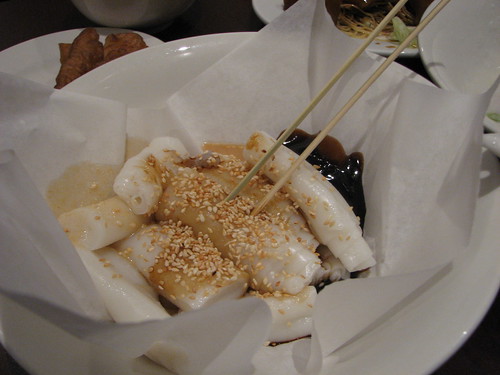 The fritters (油条) were however absolutely sub-par. They we paltry, tired, and looked like they've been refrying since lunch time. Since we visited the restaurant at 8pm, this may be excusable, as congee is typically a brunch item. The second congee was ground beef and egg (the first being preserved duck eggs and minced pork): 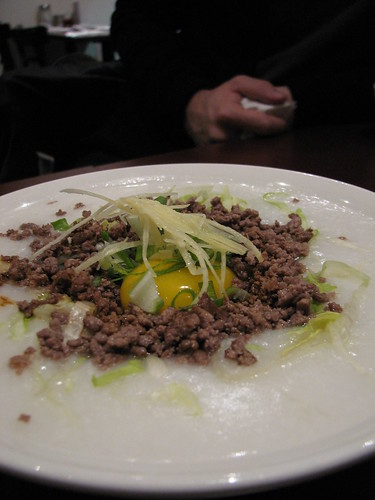 At home, we cook the meat in the boiling congee right before eating for a maximum of freshness. I was a little disappointed when I saw the pre-cooked minced meat sprinkled on top of the congee. The congee was not warm enough to cook the egg yolk further as it was swirled into.

This restaurant made a lot of effort to promote congee as a healthy food. Sure, it is - it might even be associated with the type of food that you eat when you are sick. But when taken seriously, you would discover that there are superior methods for preparing and serving congees. One kind that has unfortunately not reached Montreal is the boiling hot congee where you throw pieces of meat, preserves, whatever you want, and let it cook in front of the people eating it, a little like the idea behind the iron plate beef.

We ate a lot, but it might still be a little pricey at $50 for three, not counting the free desserts. It's a shame that it's not in Chinatown, but it's well worth a try: 1200 Boulevard de Rome, Brossard, right by the exit on highway 15, south of the 10.

Madame Pearl's Cough Syrup was the previous entry in this blog.

Saving video streams with mencoder on Linux is the next entry in this blog.