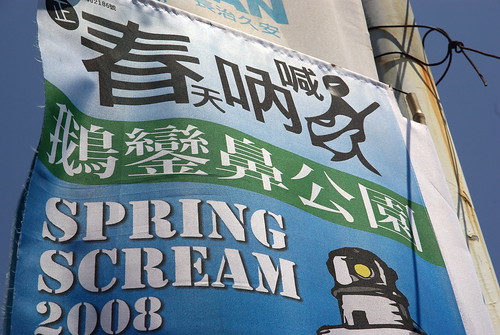 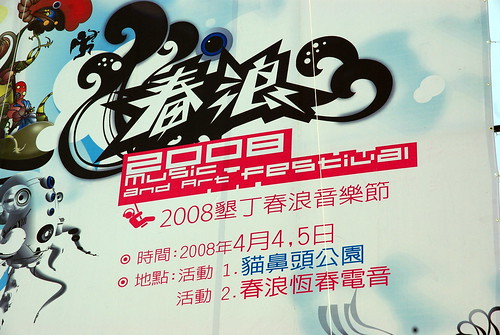 In English, there may be only a single "Spring Scream", but in Chinese, there are at least two festivals whose sites I've found.

There is the so-called "original" one, founded fifteen years ago by an American expat duo, Jimi and Wade. Theirs is a lot bigger act compared with any other, as described in this preview that I wrote last month. The other festival, however, holds the big local pop names, such as Tanya Chua, Sodagreen and Cheer Chen. I am very tempted to at least attend the Cheer Chen evening, just because all this Spring Scream deal started from seeing her last year performance at the _other_ Spring Scream on YouTube.

Spring Scream, whichever I end up going to, starts in less than two weeks now. I have booked a place in Da Wan, Kenting, called the Hawaii Inn, manned by a Duggar fellow and his little family of three.

More on the serious blog, once I get all my infos together.

Spring Scream likens to a mass migration thing to me. Finally, I booked the Taipei-Kaohsiung train fairly easily. However, the two-hour bus ride from KH to Kenting might be another deal. I read somewhere that 300,000 people were expected at last year's event(s). If this is not the number of tickets/day sold, then how the hell will I find a bus to drive me there. Hitchhike all the way to Kenting?

The schedule of the original Spring Scream mentions Stars as a band on the second day... Is it some random Taiwanese act or *the* Montreal-based Stars?

(Seriously, maybe they have a lot more bands, a lot more fun than us in Montreal, but man do their websites suck ass!)

Later: after a lengthy chat with the patient clerk at the HOT墾丁 MSN outlet (hotkt088882517@hotmail.com), in Chinese, no less, I was able to understand that you could get tickets online that you pickup when you get there. Adventure, adventure, where will you take me...

The lesson of using the development branch of a Linux distro was the previous entry in this blog.

This week in cheese is the next entry in this blog.