In the world of tagging (attaching metadata to stuff on the web), very unlikely associations can happen due to exhaustion of particular acronyms.

Yesterday, I took the following picture, and posted it on Flickr: 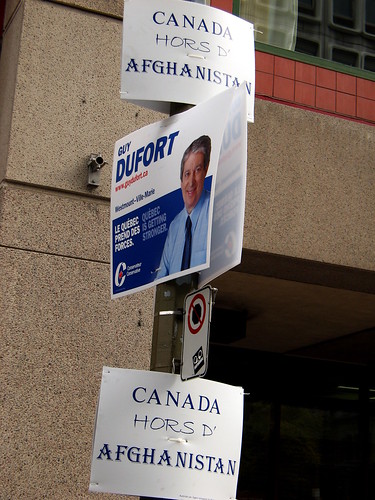 I initially did not tag it with anything, but had in the title the word "Conservative", describing our riding candidates' poster being sandwiched between two signs of "Canada get out of Afghanistan". Later this morning, I get invited to the Conservative Party of Canada (International) (sic) group.

And then, I see Asian girls in various poses (SFW). I go around looking at the pictures, and end up realizing that they belong to... the Cebu Photography Club!

So, is someone in Cebu, a well-known resort island in the Philippines that caters to all East Asia, following the Canadian elections? Well, according to Flickr pictures of the Conservative Party of Canada (International) group owner, he is a probably of Filipino origin, living in or with ties in the Vancouver area (mentions Seattle, but is also getting stuff at Costco that is bilingual English/French)...

On the same run, I also found out that Stephen Harper, not just as Prime Minister, but as the Conservative candidate, may have a Flickr account. Someone accepting those Flickr automated (?) group requests is maybe not doing his job well (or maybe doing it too well).

Gadget to lookup geocodes was the previous entry in this blog.

Quoi? Juste 661 participants sur Buzzz.tv? is the next entry in this blog.