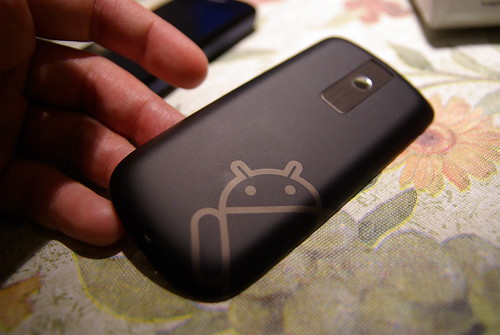 Android Dev Phone 2 cover. The AD2 is also known as the Google Ion, a software remix of the HTC Magic. Was handed out to Google I/O 2009 attendees and made available to other developers in November 2009.

When Google's new "superphone" Nexus One was released yesterday, it was made available for online orders shipping to four places in the world: the US, the UK, Singapore and Hong Kong.

In Canada, I was paying CA$40/mo for high-speed (7mbps) Internet over fixed-line, on top of a mobile phone service (no data) that costs me CA$35/mo.

Hong Kong is a city where you can get pay-as-you-go SIM cards for your GSM phone with a company like China Mobile HK for just HK$100 (CA$13.50) and get charge HK$0.10 (just above one cent) per local minute, and HK$0.25 (about three Canadian cents) per minute for Overseas calls to places like Canada, the US and the UK. If you sign up for a monthly postpaid plan (need a HK ID, or pay a ~HK$3000 deposit), you can get ridiculously cheap plans. My family and friends here constantly tell me about plans going for HK$50-100/mo. (CA$6-15), giving them access to stuff like 1000 minutes, up to a practically unlimited amount of minutes to call to Canada.

But one of the reason -- I think -- making Hong Kong such an appealing market for Google to roll out its version of the future (in the cloud) is also the cheap price of mobile broadband. 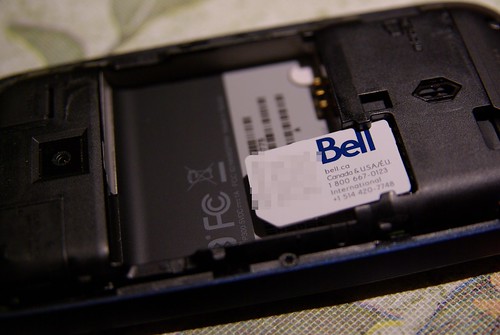 Android Dev Phone 2 with a SIM card from Bell (Canada).

Back in Canada, all major phone companies offer mobile Internet, but always with some sort of limitation on the bandwidth. Bell released its new HSPA+ network in Fall 2009, with potential speeds up to 21mbps (that's 3 times as fast as the typical high-speed Internet by fixed phone line), but typical speeds going much lower, probably running at 3-7mbps (just speculating). The price? A regular 500Mb data plan for iPhone goes for CA$50. That's not a lot of data, if you consider that each video watched on YouTube can be 5-10Mb. Other Bell data plans range from CA$60-100 for bandwidths of 1-3Gb.

Now in Hong Kong, I am also a personal consumer (I don't get any phone, let alone phone plan from any company that would employ me), and recently switched from a prepaid plan with China Mobile HK (the lowest of the low in HK, but a v. good short term prepaid option) to a postpaid data plan with SmarTone-Vodafone, probably the company with the next to the best (CSL/Telstra) mobile network coverage and quality in Hong Kong. Now this plan sets me back HK$250 (all fees included) and gives me unlimited data (and an insane to Canadians, but expected by Hongkongers, amount of minutes) at typical speeds of around 2-3mbps.

Now, bear in mind that in this market, HK$50 monthly plans are the norm for the masses. But with a comparable cost of living to Canada (3/4 of Canada in daily expenses), this means that with tethering (using your phone as a modem for your computer) for an extra HK$50, for a total of HK$300 (or CA$40), people in Hong Kong can drop their fixed Internet line altogether, and like to paraphrase Google, merge their phone with the Web for ridiculous prices for North American wallets.

Unlimited high-speed data plans are sold by 3 or 4 companies in Hong Kong, with prices varying around HK$250/mo, the price at SmarTone-Vodafone with a 18-month contract. The selling point, at least for me, was that you can break your contract at any point for just a HK$500 (CA$66) fee.

Is that the sign that mobile phone contracts are starting to become a thing of the past? The plan is again very poorly advertised by SmarTone, because subsidized phones are still the way. This HK$250 monthly contract is only available if you bring your own unlocked smartphone, very common in Hong Kong... and now available directly from Google at US$530, or US$580 (HK$4500) when counting an AC adapter and international shipping to Hong Kong.

If your needs don't justify such expenses, Hong Kong is probably one of the easiest places in the world to find second-hand phones of reliable quality (this is not the jungle of Mainland China). One of my friends went to Mong Kok and bought a "used" HTC Tattoo (came out just in October 2009), HTC's budget-range smartphone that is running Android 1.6 for only HK$1000-something (around CA$200 if I remember correctly).

250/mo becomes 3000/yr (CA$400), for all your Internet needs. When I'm going to read these numbers in 5 years, I'm probably going to be as amazed as what a regular laptop or desktop computer used to cost 5 years ago...

My new lamp is the next entry in this blog.